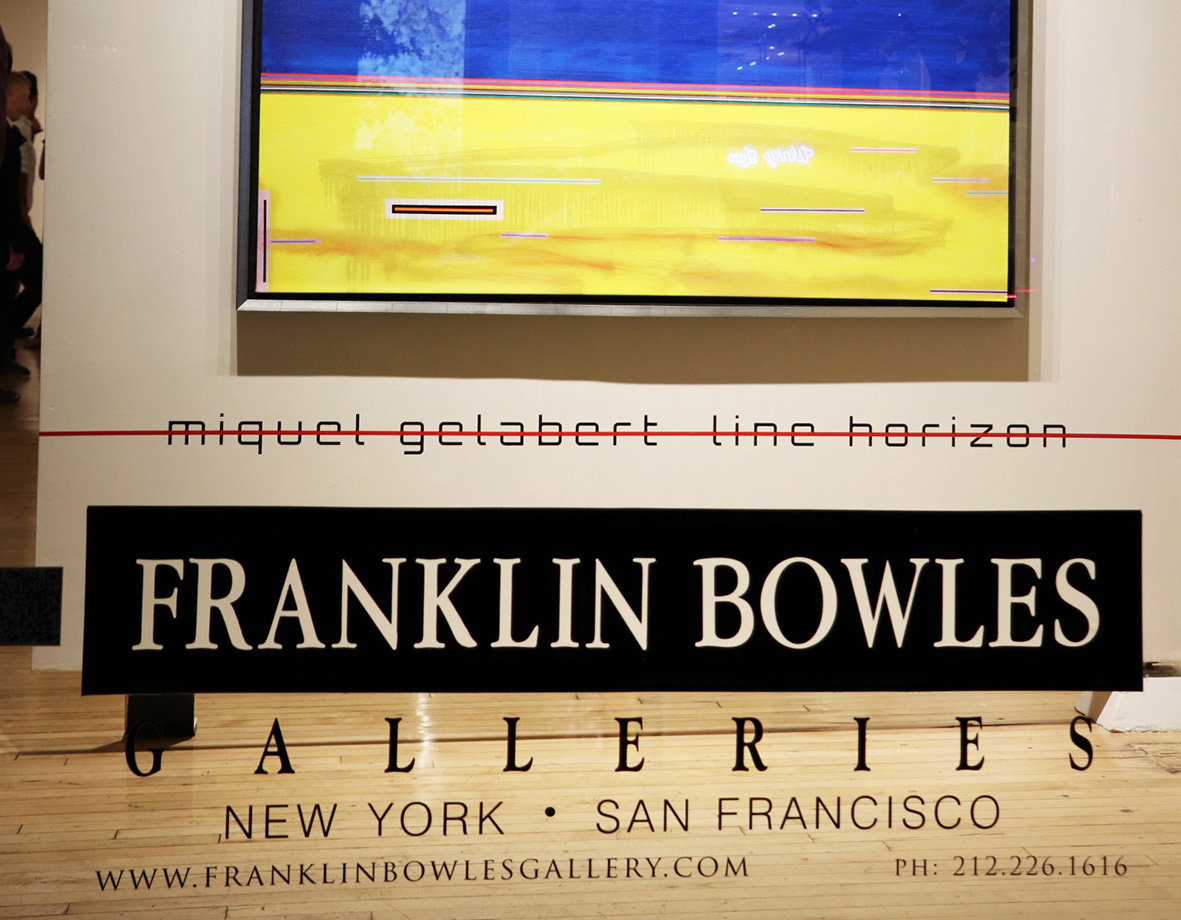 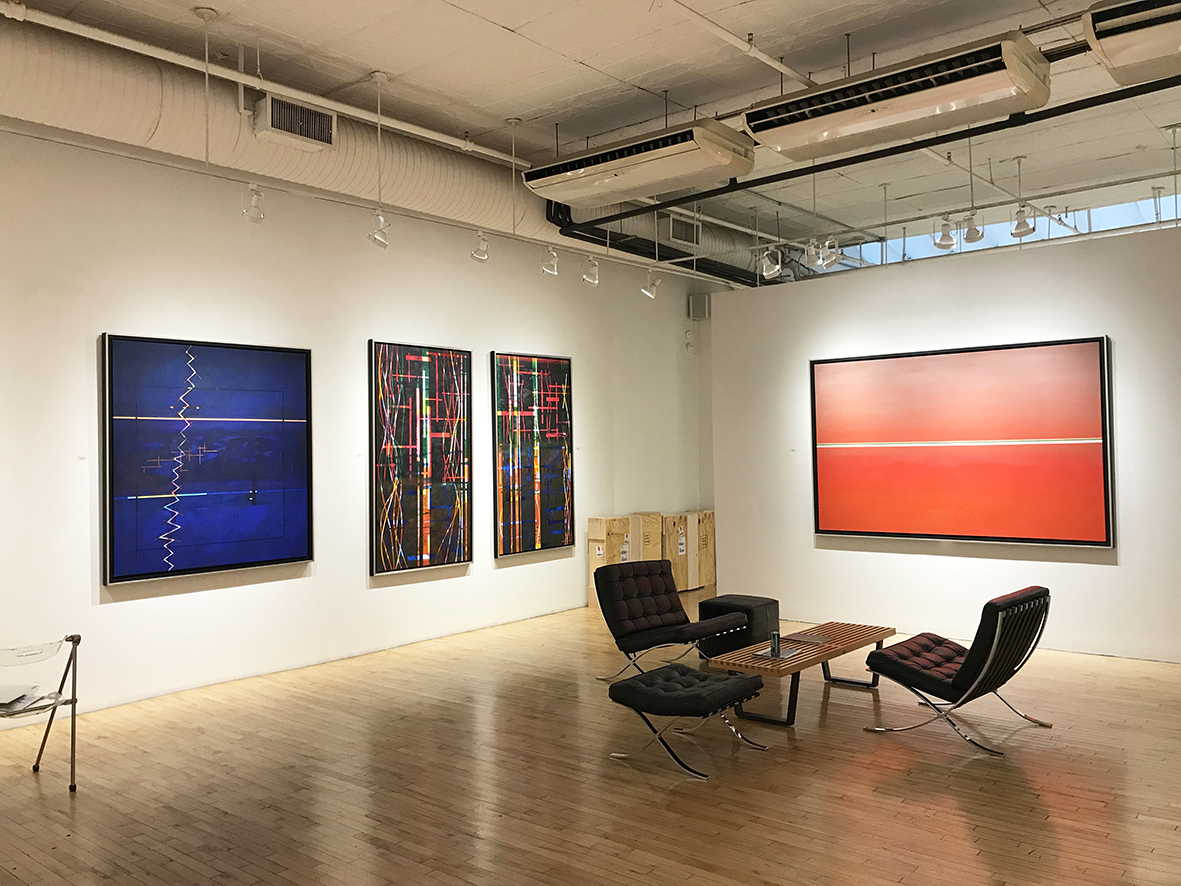 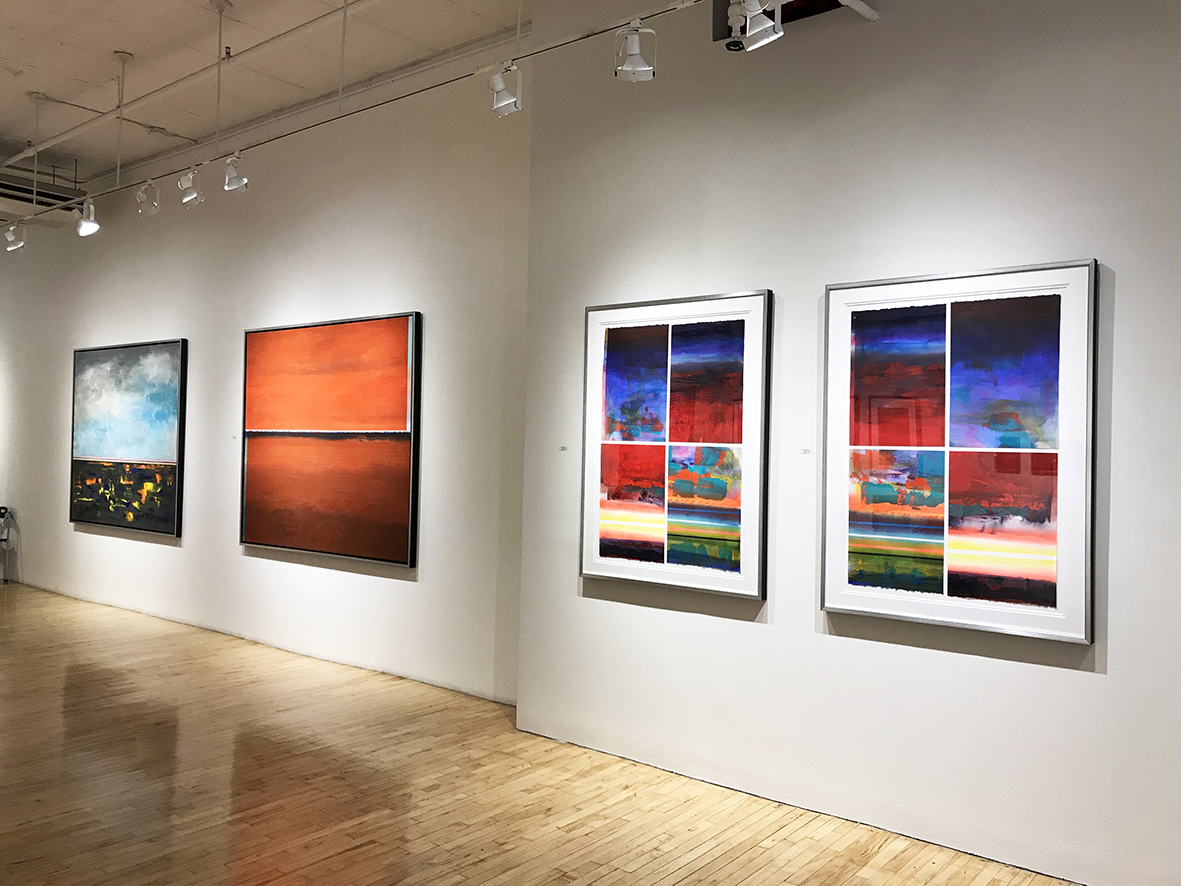 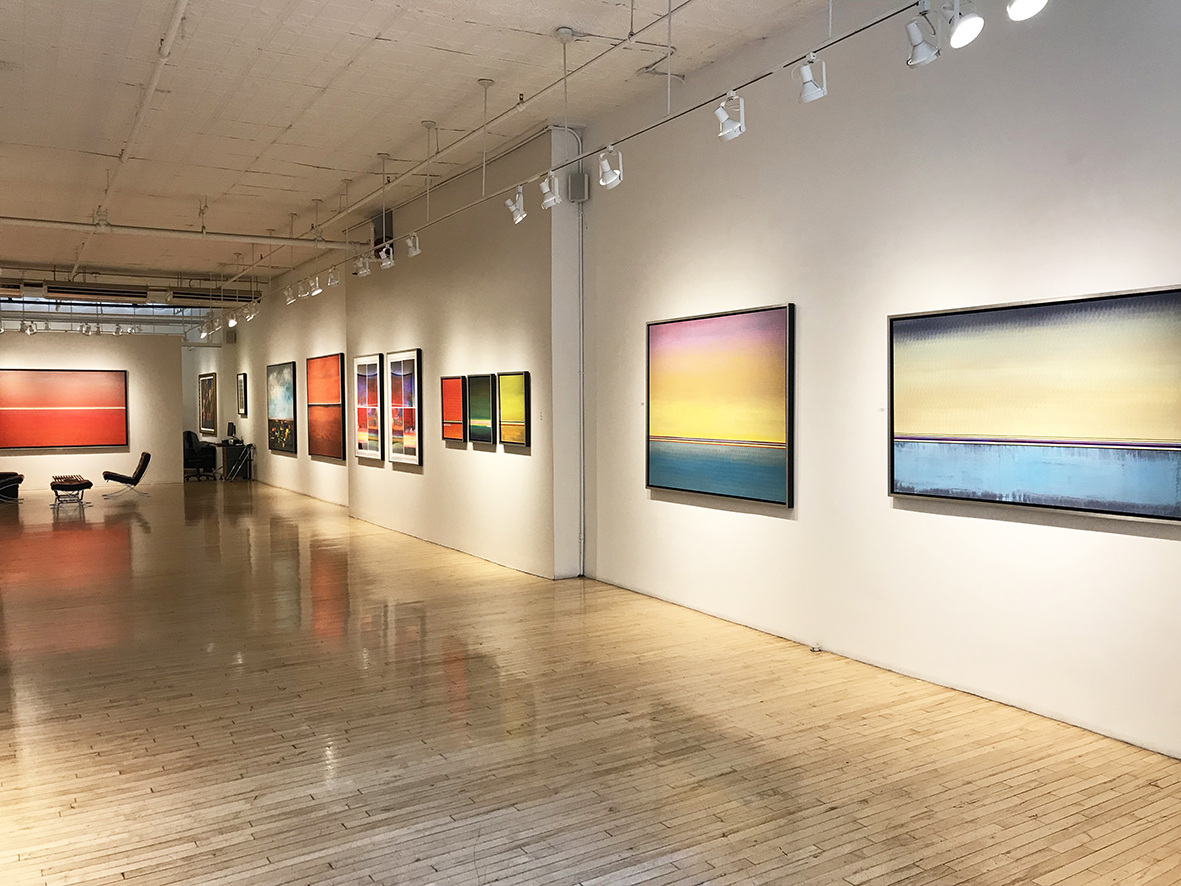 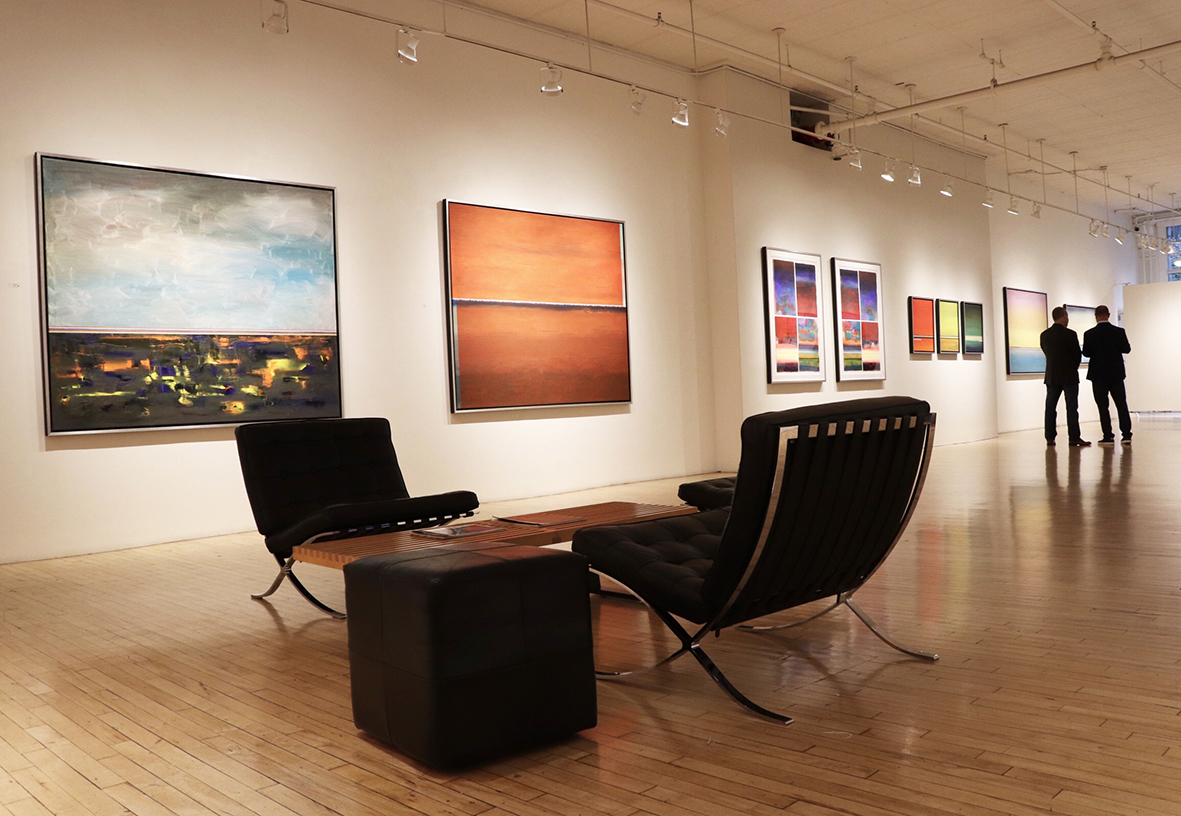 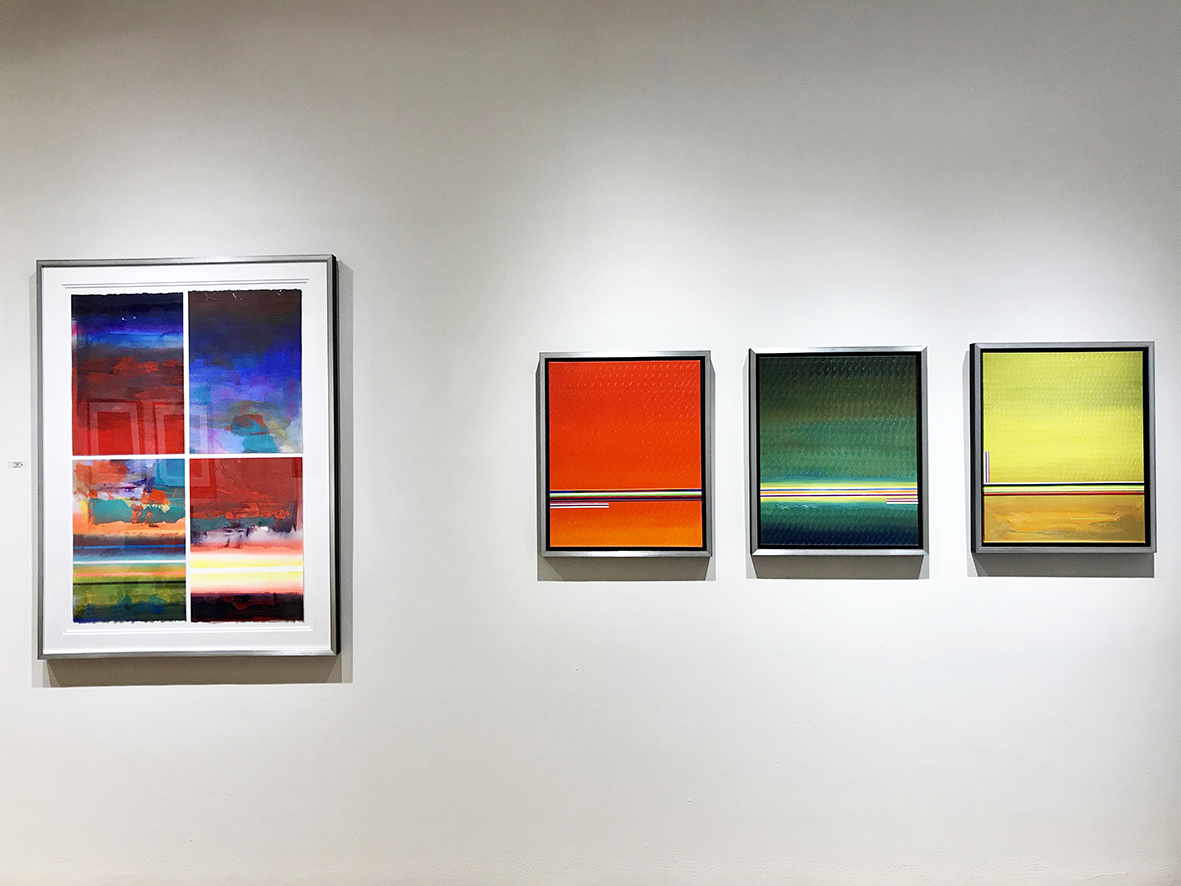 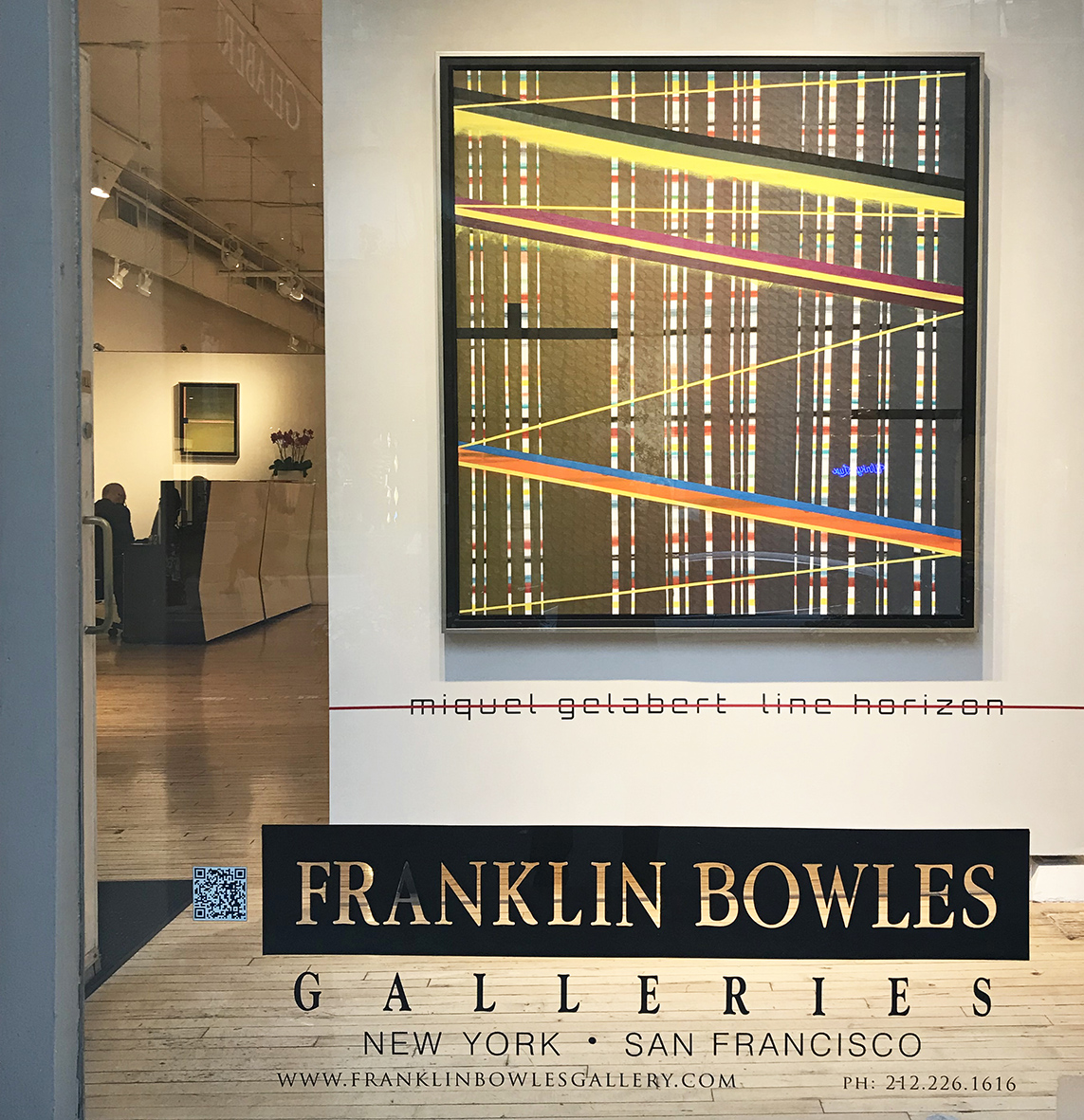 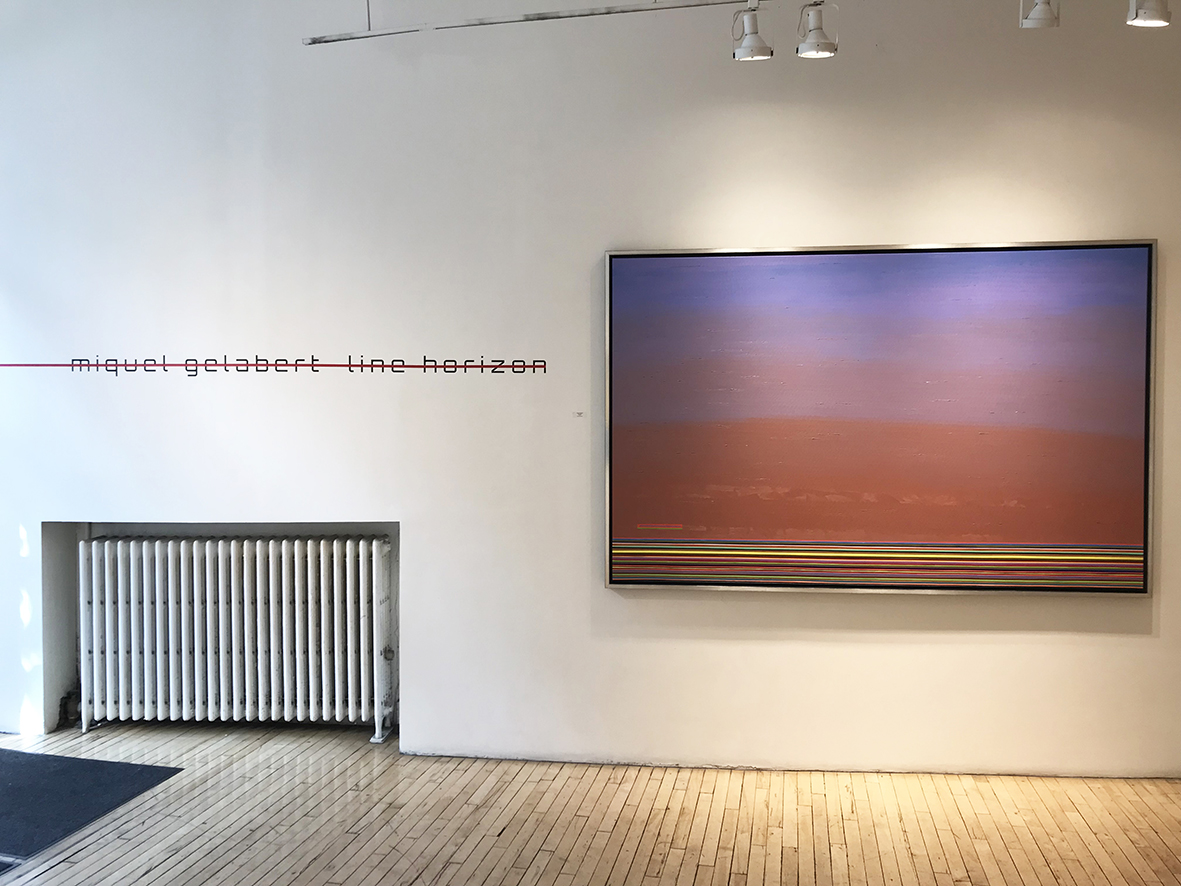 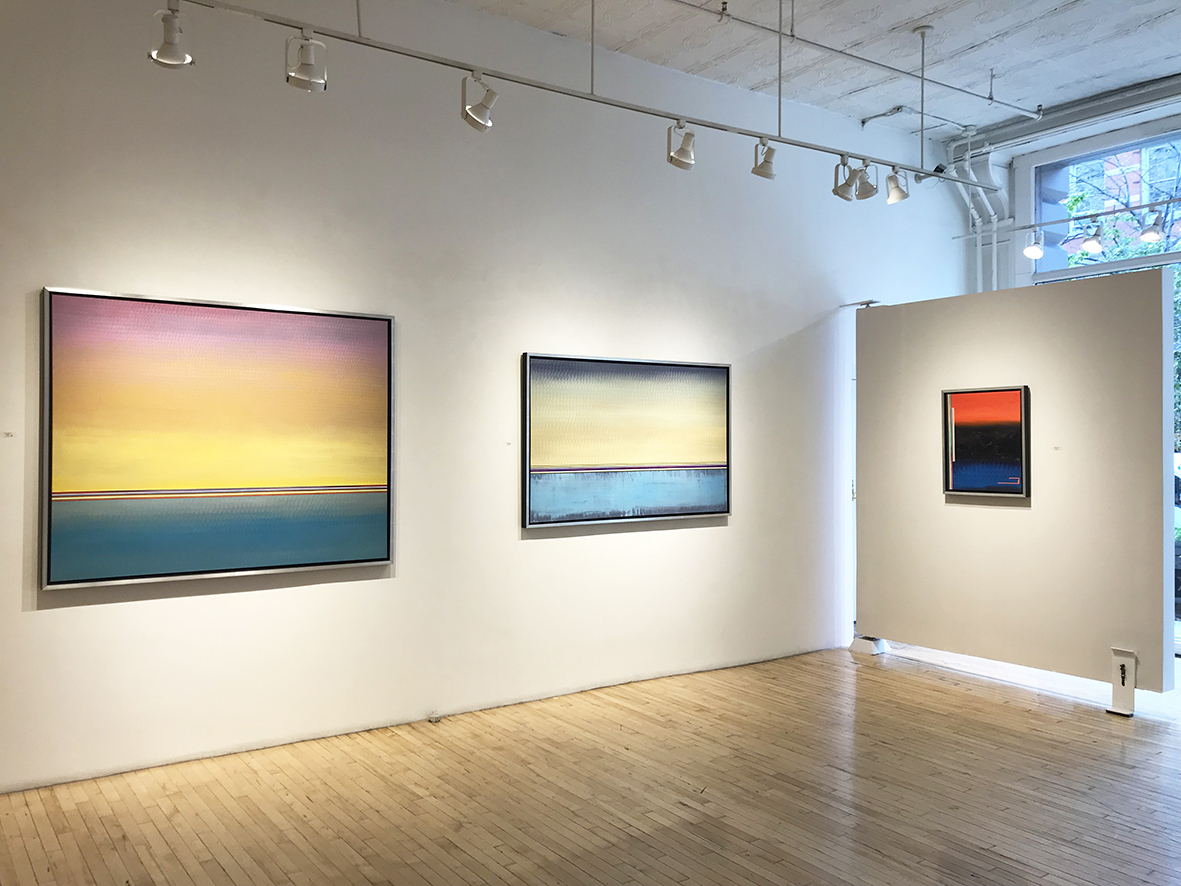 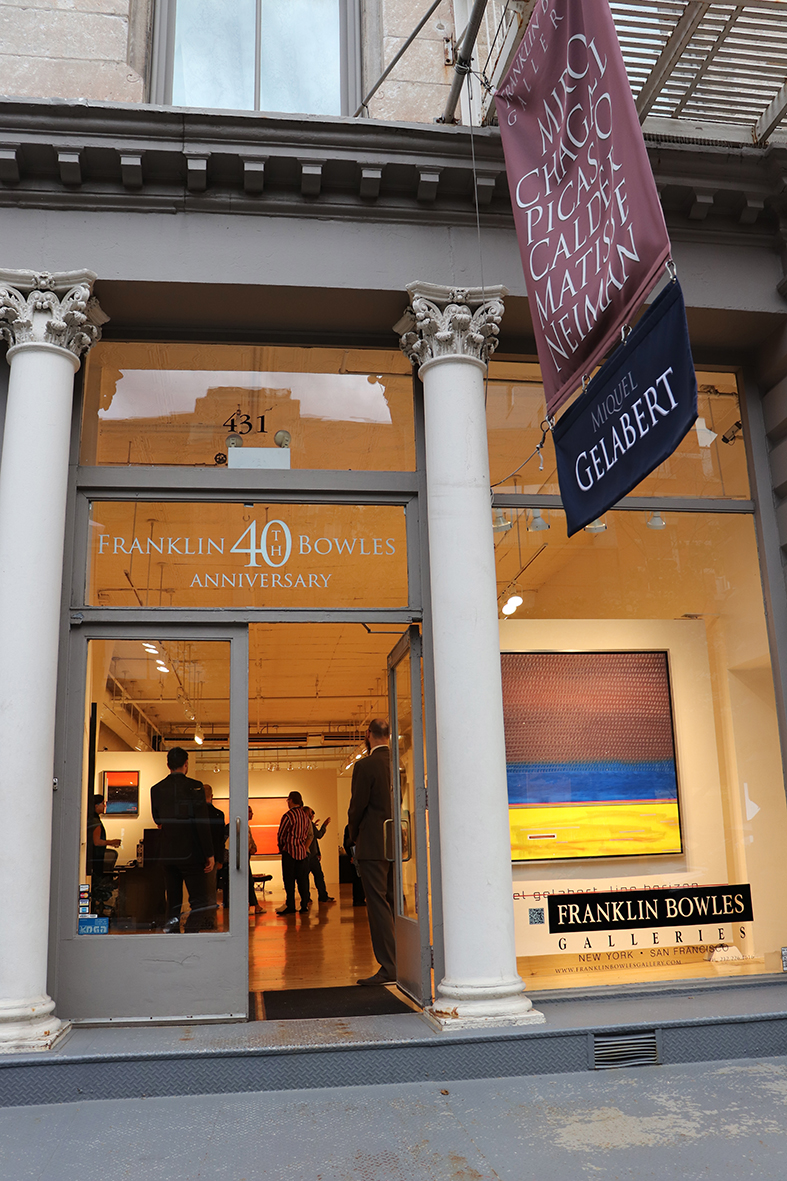 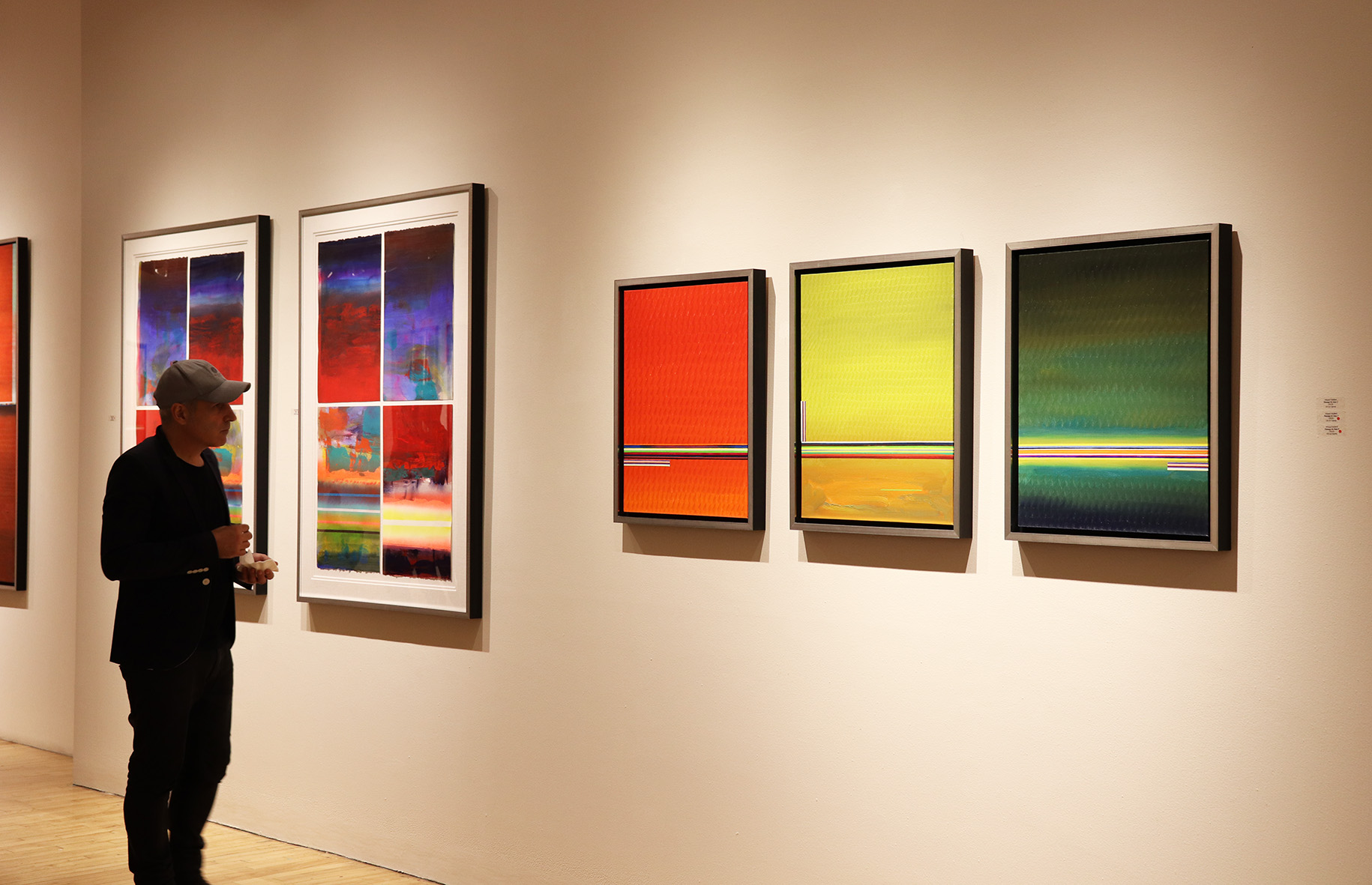 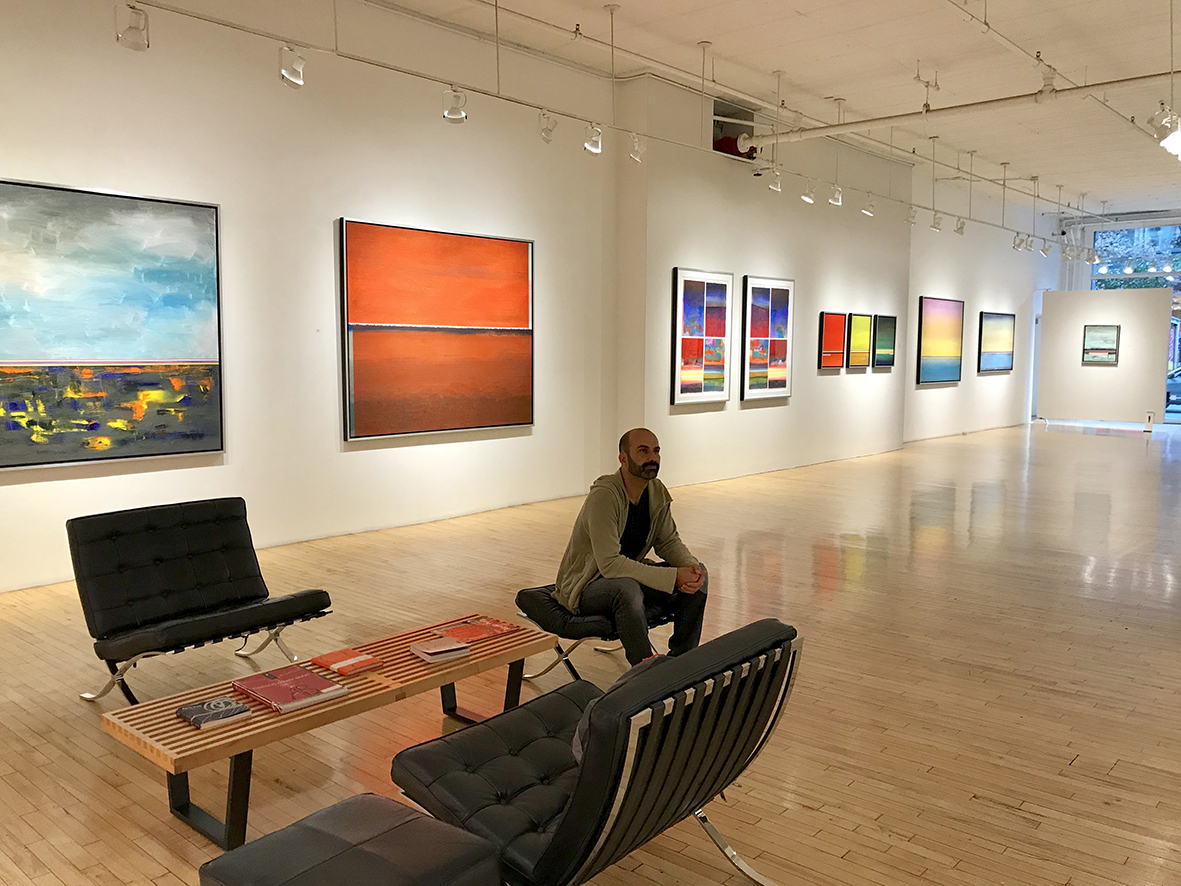 Fresh from the studio. A conversation between Albert Mercadé and Miquel Gelabert.

AM. Hello Miquel, it’s a pleasure to be with you here again, immersed in painting, in this splendid new studio that you have built in the town of Blanes (Barcelona). We two have usually met, above all, in Barcelona, where you lived for many years but, one way or another, Blanes and its sea always came out in our conversations about painting. As an artist, how would you describe this return to the town where you were born? What stage in your life and artistic development are you at just now?

MG. Coming back to Blanes is, in a way, like returning to my childhood memories. The sea, the horizon, the blue of the water and the sky… memories which have always been with me, though, and have always been present in my painting in one way or another. I feel that I am at an important moment in my trajectory as an artist. I am working fully and freely on concepts like nature, the sea, geometry, light, composition, the horizon, colour, the seascape, the cityscape and so on.

AM. I know that it is extremely difficult for a painter to describe their feelings in words – that’s our job, in fact – but I would like you to try and verbalise your feelings and emotions about the sea and nature, and how your experience of them are present in your work.

MG. There is something magical about the sea, I feel. You are suddenly in a familiar environment but one that is not quite yours. A medium in which you float, you fly... and in which a new world appears, a world soaked in blue tones. I very clearly remember the impression and the feeling of beauty that I got from seeing flotillas of fluorescent plankton floating on the sea at night during a voyage on the family sailboat to the Balearic Islands. And the spectacular image when the sun rises in the midst of the sea, surrounded all around by the 360-degree horizon. To see how the light gradually floods the whole marine landscape, which changes from the most absolute black to deep blue, then subtler tones, with a touch of orange and yellow as the sun rises up in the sky... and it is obvious that all these memories have left a mark on my work, just as we can find influences perhaps more from the scientific world, such as my “micro” or “macro” approaches to certain spaces or atmospheres, or the subject of geometry. Some elements of my work can also be linked to music.

AM. Two years ago you decided to continue your artistic adventure alone, with your own gallery, living only off your painting. You’ve always been an independent person, but for many years you worked every week as Eduard Arranz-Bravo’s assistant. Looking at all that in perspective now, what do you think you learned from Arranz-Bravo’s painting or his personality?

AM. You’ve always felt like a painter and described yourself as such. You follow the maxim – I think Isidre Nonell said it for the first time – “I paint and that is all”. However, as a person interested in your own time, you know that, in the world of contemporary art, there are many ways of expressing oneself today, from conceptual art to performance. How would you describe your day-to-day life as a painter within this diverse framework of contemporary art, and in what ways does this context enrich your painting?

MG. It doesn’t affect me particularly. I am interested in interesting things and I suppose these things enrich my painting. And we should remember that painting forms part of the diverse contemporary framework you refer to, I mean, the use of an artistic technique like video or installation does not necessarily make for art that is more “modern” than painting. Nowadays there are many painterly languages that perfectly reflect the twenty-first century experience.

AM. In the last piece I wrote about your work – I believe it was on the occasion of your exhibition in New York in 2015 – I observed that, despite the clear personality in your painting, it still formed part of a particular tradition, which is Catalan modern painting. I wrote about the relations between abstraction and nature that we find in the work of Miró or Arranz-Bravo himself. What do you think – do you feel that you are part of that tradition? And, if not in those terms exactly, how do you think Catalan painting has interested or influenced you?

MG. Whether I form part of the tradition, I don’t know, perhaps, we’ll see. Influenced by it, certainly. I have always admired Miró’s work and, as we mentioned before, I collaborated and worked with Arranz-Bravo for eleven years, at his studio and on all the projects that I was lucky enough to share with him, including monumental public sculptures, large murals and the more intimate day-to-day work of painting. A privilege.

AM. What other artistic influences do you have, internationally speaking?

MG. The subject of influences is a delicate matter. If I had to mention them all we would never finish, and you always forget one or two. Just recently I have been interested in discovering artists, particularly contemporary artists, that I didn’t know before and find interesting for different reasons.

AM. Let’s talk about your recent work now. I was amazed by the maturity that your painting is beginning to take on. By maturity I mean that you are able to work in very different abstract registers and always with high quality (I remember that in your first exhibitions you were obviously very good but your register was more limited). Now I find good pictures at all levels: in your classical landscapes (Geomrise); in the hazier landscapes, more along the lines of a Rothko (Hori); in more radical, daring paintings (Dianit); in the geometrical nocturnal pieces (Whitescape Blue); and in simple, elegant, minimal compositions (Greenland). Tell me a little about your experience in your day-to-day activity in the studio, working in these different abstract registers.

MG. It’s not something deliberate, it just happens. I have always worked on several paintings at once and I suppose that leads them to take on a kind of coherence among themselves. When you look back over the course of a year, you see that different registers exist, but they are all related to each other. Some paintings may seem very different at first glance, but if you look carefully you can find links between them. They are always joined by a guiding thread.

AM. I love the series After, which you produced this year, 2018. Two things that I had not seen before surprise me. Firstly, your use – correct me if I’m wrong – of your palette and the application of colour in many layers, superimposed and interwoven with fragmented, flat, horizontal stripes. The second is the highly dramatic atmosphere (previously, your geometry was generally more mysterious than dramatic).

MG. Yes, it’s certainly more dramatic than mysterious. But, as I mentioned before, it needed to be like that. When I start to work on a series of paintings there is no clearly-defined approach. There is an intuition, a vague idea, nothing final, and the idea gradually takes on its own personality. Each series of paintings finds its own way. I have never worked from sketches, and that means that the start of each painting is different: a stain, a line, a form… all these things can become the driving force to start creating a painting.

AM. I also found the Noct_Geom series very surprising. This is a very daring series in terms of colour, geometry and structure. I like that fact that, first and foremost, despite the risk, you do not give up your personality: you continue to build dialogues between hazy backgrounds and geometric foregrounds. And, secondly, I like the way you increase the risk, using colour and geometry to create vibrant new structures. What inspired you to paint this new series?

MG. It’s a series very much focused on the sea. But I only realised that after it was finished. It makes me think of a dreamlike seabed at night. It can carry you off to a strange maritime landscape, mysterious, nocturnal, with forms reminiscent of seagrass.

AM. I was also pleasantly surprised by Paisatges de juny (June Landscapes). It’s as if you had let yourself go, in the positive sense of the term. You conserve the general structure, but your execution of the brushstroke in these works is more naive, an aspect I had rarely noted in your painting before. What do you think of this new, fluid brushstroke? Is it a reaction against the geometric structure that sometimes defines your work?

MG. I suppose that with the experience you accumulate working over a long period time, you feel more able to explore new worlds and new languages that were there, no doubt, but which you didn’t dare to use or you couldn’t work out how to include them in your own language. It all forms part of a logical evolution.

AM. Finally, from the social and cultural standpoints, what do you think painting brings to twenty-first-century societies?

MG. Contrary to what people might think at first, modernity.